Now that the new episode is out. I can draw attention to the fact THAT DEATH IS NOW CANON! 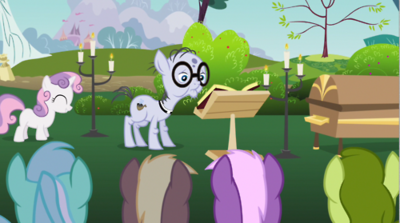 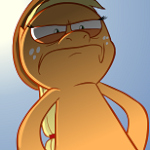 pfft. It's been out.
Loved the song! 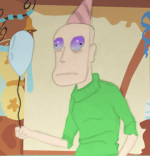 I meant out officially. I had to keep from blurting this out for two days

But seriously. I'm too lazy to re-upload the pictures. so Have a link:
Cheerilee's faces in the episode were awesome.

Glad to see Cheerilee get more character developement. As well as the subtle shipping suggestions of background ponies. FIM Team, you are Awesome!

Nice to see the grey chubby colt in Cheerilee's classroom agian. What is his name btw? I keep calling him Chowder.

Never would have expected that from a show targetted for 5 year olds, but FIM Team is Awesome. Although, starving ponies were mentioned in Hearth's Warming Eve, but never expected them to show one. Applebloom has quite the imagination. Now all we need is the lifespan range of non alicorn ponies. I still think its similar to our own 120 years or less. Also, I want to know who's funeral!

Earth Pony Strength! Nice to finally see they have a unique ability despite lack of magic & flight prowess. I dont care what Hearths Warming Eve projected, Earth Ponies = Spartans! (I reject your reality & substitute my own)

Since I'm still on Big Mac, My goodness! So that's why Big Mac doesn't talk much. That swag is a weapon Big Mac shouldn't use lightly!

Equestria Daily posted quite a few things I missed - http://www.equestriadaily.com/2012/02/episode-followup-hearts-and-hooves.html?commentPage=2

I have no comment on anything except the buried tire.

Equestria is Earth many millions of years in the future. I'm putting it in my next fic:

"This planet is very old, very old indeed. So old that geologic processes have create gemstones in almost every rock. Do you know what happens to very old planets? They become tidally locked to their sun. One side burning, one side in perpetual night. Unless there is a native with the telekinetic ability to keep the planet spinning..."